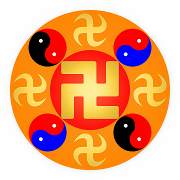 Falun Dafa (also called Falun Gong) is an advanced practice of Buddha school self-cultivation, founded by Mr. Li Hongzhi, the practice’s master. It is a discipline in which “assimilation to the highest qualities of the universe—Zhen, Shan, Ren (Truthfulness, Compassion, Forbearance)—is the foundation of practice. Practice is guided by these supreme qualities, and based on the very laws which underlie the development of the cosmos.” Master Li’s teachings are set forth in a number of texts, among which are included Falun Gong, Zhuan Falun, The Great Perfection Way of Falun Dafa, Essentials for Further Advancement, and Hong Yin (The Grand Verses). These and other works have been translated into thirty-eight languages, and are published and distributed worldwide.

The focus of Falun Dafa practice is the mind, with the cultivation of one’s mind and thoughts, or “Xinxing,” being singled out as the key to increasing Gong energy. The height of a person’s Gong is directly proportionate to that of his Xinxing. The concept of “Xinxing” encompasses the transformation of virtue (a white form of matter) and karma (a black form of matter). It also includes forbearance, discernment, and abandonment—that is, forsaking ordinary human desires and attachments, and managing to endure the most trying of ordeals. Much is encompassed by the concept.

Falun Dafa also includes the cultivation of the body, which is accomplished by performing specific exercises. One purpose of the exercises is to strengthen the practitioner’s supernatural abilities and energy mechanisms by means of his or her powerful Gong force. Another purpose is to develop many living entities in the practitioner’s body. In advanced practice, the Immortal Infant will come into being and many abilities will be developed. The exercises of Falun Dafa are necessary for the transformation and cultivation of such things. A comprehensive mind-body cultivation system such as this requires both self-cultivation and physical exercises, with cultivation taking priority over exercises. A person’s Gong simply will not increase if he or she merely does exercises while failing to cultivate Xinxing. The exercises are thus a supplemental means to achieving spiritual perfection.

Falun Dafa involves the cultivation of a Falun, or “law wheel.” The Falun is an intelligent, rotating entity composed of high-energy matter. The Falun that Master Li Hongzhi plants in a practitioner’s lower abdomen from other dimensions rotates constantly, twenty-four hours a day. (True cultivators can acquire a Falun by reading Master Li’s books, watching his 9-session lectures on video, listening to his 9-session lectures on audiocassette, or studying together with students of Falun Dafa.) The Falun helps practitioners to practice automatically. That is, the Falun refines the practitioner at all times, even though he or she isn’t performing the exercises at every moment. Of all practices made public in the world today, only Falun Dafa has managed to achieve a state in which, “the Fa refines the person.”

The rotating Falun has the same qualities as the universe, and is the universe’s miniature. The Buddhist Falun, the Daoist Yin-Yang, and everything of the Ten-Directional World are reflected in the Falun. The Falun provides salvation to the practitioner when it rotates inward (clockwise), since it absorbs a great amount of energy from the universe and transforms it into Gong energy. The Falun provides salvation to others when rotating outward (counter-clockwise), for it releases energy that can save any being and rectify any abnormal condition. Being in the presence of someone who practices thus benefits a person.

Falun Dafa “brings a person to a state of wisdom and harmonious existence. The movements of the practice are concise, as a great way is extremely simple and easy.” Falun Dafa is unique in eight ways:

The teachings of Falun Dafa are thus completely unlike those of conventional practice methods or those that are based on the development of an internal elixir, or Dan.

Falun Dafa practice begins at a high plane right from the outset, thus providing the most expedient, fast, ideal, and precious means of practice for those with a predestined connection or who have been practicing for years using other means but failed to develop Gong.

When a practitioner’s Xinxing and the strength of his Gong reach a certain height, he or she can attain an imperishable, adamantine body while still in the secular world. A person can also achieve the “unlocking of Gong,” enlightenment, and ascension of the whole person to higher planes. Those with great determination should study this upright teaching, strive to achieve their ultimate rank, elevate their Xinxing, and forsake their attachments. Only then is spiritual perfection possible.

May you cherish it—the Buddha Fa is right before you.